Michel Marchetto, Alpex informs in Fresh Plaza that there is “25% growth of Algeria’s banana imports, but the results are mixed”.

“A few weeks before the end of the year, we can already say that 2020, despite the problems linked to the coronavirus crisis, will be marked by a new increase in banana imports in Algeria,” reports Michel Marchetto of the company Alpex. The French company is specialized in the export of fresh fruits and vegetables and exports a lot to Algeria. The green banana is also one of its flagship products.

An increase in volume favored by two factors
The volume of bananas imported by Algeria has increased by around 25% (up to week 45). “For 2020, the total volume is estimated at 301,000 tonnes, compared to 241,000 tonnes in 2019,” say Michel. “This increase in volume was largely driven by two factors. Firstly, the average FOB price is plummeting in Ecuador. For 2020, the average price is estimated at $ 7.80 per package, while in 2019, it was still $ 10. Secondly, there is also the trade war waged by the few operators able to import full shipments. Most of the importers are smaller. They import in containers,” he says.

“Like FOB prices, sales prices in Algeria have also fallen sharply. While this is good news for consumers, it isn’t as good for operators in the sector. In fact, many importers have had a very bad year because of the chaotic situation in Algeria. The oversupply, linked to the excessive imports by boat, has taken a toll on the market most of the time, barely allowing operators to make a profit.”

Michel says that the trade war has been underway throughout the year, as Ecuadorian exporters had additional volumes this year and the international markets have been unresponsive. “This unprecedented price war has weakened all operators for months. Nothing leads us to expect a real improvement in the coming weeks.” 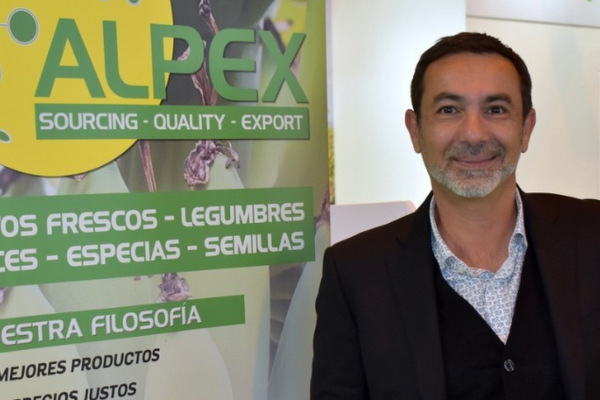 A year of progress
In any case, Michel stresses that despite this difficult context, Alpex has had another year of positive development. “This, of course, applies to bananas, with more than 1,000 containers exported against 770 in 2019, but also to apples and other products that we export (Spices, Legumes, Dried Fruits, Nuts, Seeds), with a 39% growth in terms of revenue compared to 2019.”

“In addition to the traditional products that we have been working with for several years, such as white beans, lentils, chickpeas, split peas, dried apricots, raisins, ginger, cassia, etc., this year we exported new products, such as chili, black pepper, dehydrated coconut and granulated garlic. The results are satisfactory and for us it is obvious that we are only ‘starting’. In fact, alongside our commercial development in other Maghreb markets, such as Morocco or Tunisia, the development of these ranges remains a priority for us.”