Three reasons some countries are far more unequal than others

The picture above is of Hyejin Kang / Shutterstock

Technological change and globalisation act as powerful forces for income distribution, but these market processes cannot alone account for the continued range in top income inequality in different countries. After all, some of the most technologically advanced and globalised countries, such as Denmark and the Netherlands, are the ones that are the most equal. 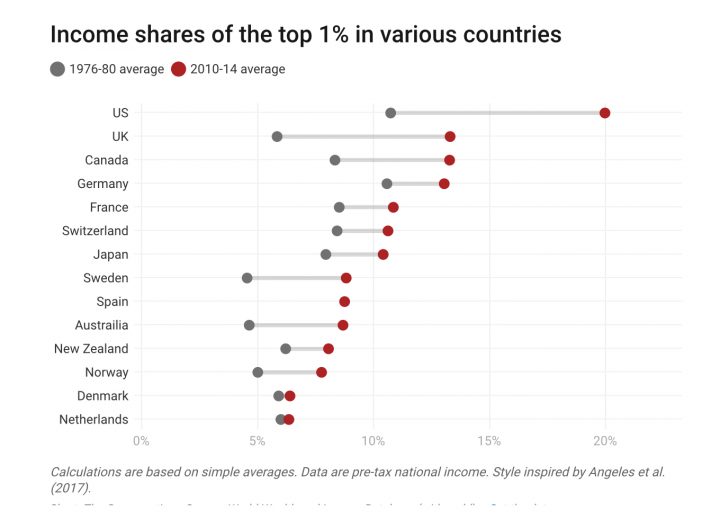 To explain why some advanced capitalist countries are more unequal than others, we need to look beyond the market and explore the role of politics and power in shaping distributive outcomes.

Want to have a more equal society? In a critical review of recent research, I’ve found that the formula is surprisingly simple: tax the rich, vote for left-wing parties, implement electoral systems of proportional representation, and empower trade unions.

One key political factor is government policy, especially taxation. Countries that have made the biggest reductions to their top rates of income tax have seen the largest increases in top income shares. For example, in more equal France, the top rate in 2010 was only 10% lower than it was in 1950. Meanwhile, in the more unequal US it was 50% lower. At the company level, CEO pay tends to be much higher when the top income tax bracket is lower.

The formal political arena is one site where these power relations unfold. A recent study by Evelyne Huber, Jingjing Huo, and John Stephens studied the income share of the top 1% in postindustrial democracies from 1960 to 2012. They found that centre and right-wing governments in rich countries are consistently associated with increases in top income shares. Meanwhile, policies of left-wing governments generally reduce inequality at the top end.

The institutional design of the political system also matters. Electoral systems of proportional representation tend to favour left-wing parties, while systems that are led by majority rule favour right-wing ones. Certain institutional features, such as having presidents and bicameral legislatures encourage gridlock and empower special interests to block progressive policy reforms.

There are questions about the extent to which the institutional story can be generalised, but as Jacob Hacker and Paul Pierson show, it is crucial in explaining the spectacular rise of the super-rich in the US.

In addition to left-wing parties, strong trade unions act as a power check on top income shares. Unions can align with left-wing parties and push for egalitarian policies. Within the firm, unions can bargain to increase their wages and reduce the amount of revenue going to executive compensation and shareholder dividends.

One academic study found that unionisation decreased the compensation of top US executives by 12%. Another found that in US industries with higher levels of union membership, the gap between executive and non-executive pay was narrower. In the numerous cross-national statistical studies that I surveyed the rate of unionisation is one of the few variables consistently associated with lower top income shares.

Prompted in many ways by the pioneering efforts of Thomas Piketty and his collaborators, the study of top incomes has made remarkable progress in the past decade. But there is still room for further exploration.

The study of top incomes tends to be US-centric. There needs to be more in-depth analysis of the experiences of other countries. We need further research that investigates who the top 1% are in different countries, and how their political preferences compare to other segments of the population. We also need to explore in much greater detail the racial and gender dimensions of the income hierarchy in different countries.

Given the compelling evidence that living in highly unequal societies destroys our minds, our bodies, our relationships, our communities, and our planet, this is something we should all take seriously. The better the grasp we have of the causes of top-end income concentration in different countries, the more effective we will be in assessing what, if anything, can be done to slow or even reverse it.

This article is republished from The Conversation under a Creative Commons license. Read the original article.