GULF BUSINESS informed that a UAE company intends to tow an Antarctic iceberg into the Gulf. It announced recently that it will cherry pick an iceberg free of charge from the South Pole neighbourhood and bring it across the Equator and into the Arab-Persian Gulf and at a reasonable cost. The reasons are as per the local media, in support of water-related humanitarian purposes. Apart from any justification, would this be the equivalent of exporting the effects of the sun from the Sahara all the way to northern Europe in the form of renewable energy? In any case here is that article. 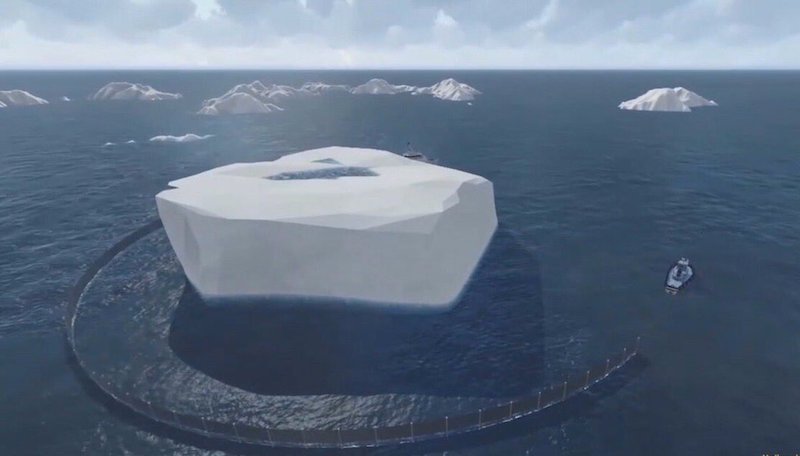 The UAE’ National Advisor Bureau Limited has said it is progressing with its project to tow icebergs from Antarctica, with plans to complete it by 2020.

The UAE-Iceberg project was first announced in May last year and aims to leverage icebergs as new sources of water in the region.

A committee consisting of scientists, experts and specialists on Antarctica, icebergs and marine science, is now being set up, and work is also on to initiate collaboration with water research centres and universities worldwide, official news agency WAM reported.

Further details about the new technology are expected to be officially announced during the fourth quarter of this year.

The pilot phase of the project is anticipated to begin during the second half of 2019 towards the coast of Perth in Australia, or the coast of Cape Town in South Africa.

It will be followed by the necessary steps to tow the icebergs to the Fujairah coast during the first quarter of 2020, the report said.

The project will also place the UAE on the tourism map as the “first desert country to offer glacial tourism on its coasts”, it added.

“Cold air gushing out from a potential iceberg close to the shores of the Arabian Sea would cause a trough and rainstorms lashing out across the Arabian Gulf and the southern region of the Arabian Peninsula all year round if the glaciers persist,” the National Advisor Bureau Limited explained during the project’s launch last year.

“The icebergs are expected to have a growing cumulative impact, causing a significantly large-scale and rapid climate change.”

It added: “Moreover, having icebergs off the coast of Fujairah will become a massive and unique tourist attraction, and will contribute to cool the east coast and transform the UAE desert into thriving green meadows within a decade.”

The melting icebergs will also release fresh water into the Arabian Sea, helping “restore the ecological balance and reduce salinity of the sea”.

An iceberg contains somewhere around 20 billion gallons of fresh water.

The National Advisor Bureau Limited has also now launched a new website to highlight the most significant stages of the project.

The launch of the website coincides with the ‘Year of Zayed’ in 2018, since the project aims to support water-related calamities such as drought and other humanitarian projects, the WAM report said