The Global Warming Policy Forum citing The Wall Street Journal on how The New Shale Tech That Terrifies OPEC has become reality where the U.S. shale oil drillers boosted by efficiency and drilling intensity, are lowering prices to a point that could soon hurt exporters like Saudi Arabia.

What doesn’t kill you makes you stronger.

Two years ago, it looked like Saudi Arabia was winning its fight against the U.S. shale oil industry by furiously pumping crude to drive down prices. Some drillers went bust and many more flirted with bankruptcy while oil drilling in places like West Texas and North Dakota collapsed.

The Saudi effort backfired. Instead of killing shale it spurred a wave of innovation that transformed drilling in the U.S. into a highly efficient industrial process, dramatically lowering costs and boosting output. During the next oil bust, it will be the Saudis who have to worry.

“High prices tend to create sloppiness in this industry because people focus only on growth,” says Doug Suttles, chief executive of shale driller Encana. “Downturns make you focus on cost because it’s the only thing you can control—the oil price is out of your hands.”

Meanwhile, something remarkable is happening. The U.S., where production was once thought to have peaked nearly 50 years ago, will become the largest oil producer on the planet by next year.

One region alone, the prolific Permian Basin, recently passed 3.1 million barrels a day of output. Stretching from West Texas to New Mexico, it would now rank No. 4 of the 14 members of the Organization of the Petroleum Exporting Countries and may soon produce more than No. 3, Iran. 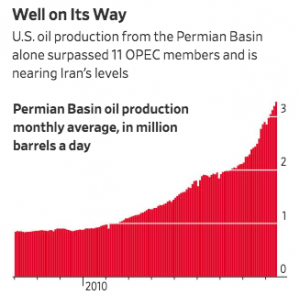 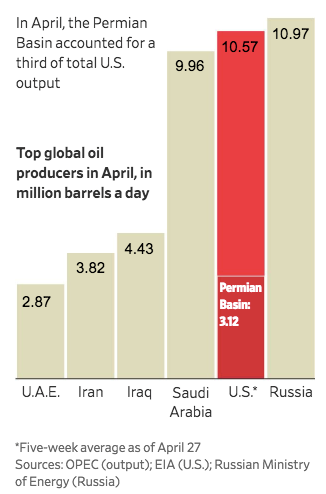 The amount of oil being pulled from the ground there is already driving global markets. But what should really frighten energy ministers in Riyadh, Tehran and Moscow is how that oil is produced. The number of drilling rigs now active in the Permian is the same as back in October 2011, yet the region is producing three times as much crude.

Just a few years ago, a well would be drilled and then the rig would be disassembled and moved to a new location—a time- and labor-intensive process. Today it is more common for rigs to sit on giant pads, which host multiple wells and the necessary infrastructure, and for them to move on their own power to a new well yards away. These rigs drill over a wider area and increasingly are being guided by instruments developed for offshore drilling that see hundreds of feet into the rock. They inject more sand underground to break open the rocks, boosting output.

Those small gains add up. Between 2010 and 2016, the average number of drilling days per rig including transport time fell at a pace of about 8% a year in the Midland section of the Permian, while initial well production grew by 33% in just two years, according to McKinsey Energy Insights.

The efficiency and drilling intensity is clear from just one site owned by Encana. The pad in the Permian started out with 14 wells, recently had 19 more added to it and may reach 60 wells—a once unimaginable concentration.

That also may make America’s reserves last longer. Encana’s approach, which it calls “the cube,” targets different layers simultaneously, which can boost the amount that can be recovered economically by about 50%, Mr. Suttles said.