The analysis of demographics in some countries, often forgotten in many studies, raises the issue of both development and national security. Because without sustainable development, it eventually could constitute a real social time-bomb. Algeria’s challenges facing its population pressure getting more acute every year will have to be addressed and at the earliest.
Whilst the evolution of the world’s population increased per the below chart. 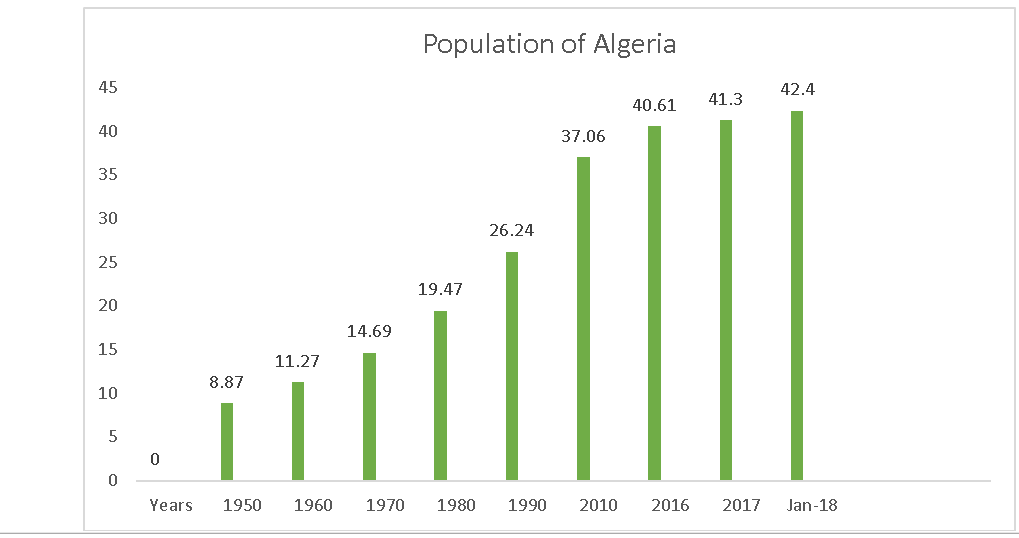 The figures given by the NSO (National statistical Office) on forecasts of the evolution of the Algerian population by 2030 would be 51,26 million. And according to the current rate hypothesis of 2.4 children per woman and by 2050 to reach 65 million inhabitants, data that must be correlated with life expectancy.
While it is 77.1 years for men and 78.2 for women, it will at birth be 81 years for men and 83 years for women in 13 years. The figures of the INED confirm the trends of the NSO, showing that the Algerian population is young, constituted at 29% of under 15 years, the over 65 years representing about 6%. According to the INED, the forecast on the strong growth of the Algerian population over the next 33 years is due to several annual births of 1,103,000 and a relatively high fertility index (number of children per woman) of 3.1 whereas countries of the Mediterranean basin such as Morocco with 2.4, Tunisia, 2.4, France, 1.9 and Libya, 2.4 have much lower rates. Egypt has however a higher one with an index of 3.3 but Niger occupies the first place in the world ranking with the highest index of 7.3.
What is the spatial distribution of the population?
According to data for 2016, the 12 provinces with a density of less than 20 inhabitants per km² account for 89% of the country’s area with just 13% of the population. The 36 other provinces, all located in the north, have a higher density of more than 120 inhabitants per km², representing 11% of the area, approximately 240,000 km2 and includes 87% of the population.
Among these 36 provinces of the north, the highest densities are found around the large agglomerations of Algiers, Oran, Constantine and Annaba, then come the more rural coastal provinces, then the inner land provinces and finally the wilayas close to the Sahara.
More precisely and in descending order we have: Algiers, Oran, Boumerdes, Constantine, Annaba, Mostaganem, Tizi-Ouzou, Bejaia, Tipaza, Jijel, Sétif, Mila, Skikda, Chlef, Bouira, Ain Defla, Ain-Temouchent, Bordj Bou Arredj, Relizane, Mascara, El Tarf, Guelma, Tlemcen, Souk Ahras, Tissemsilt, Médéa, Batna, Oum El Bouaghi, Sidi Bel Abbes, Sila, Saida, Tiara, Khenchela Biskra, Laghouat and Djelfa.
The other provinces like El Oued, Naama, Ghardaia, El Bayath, Ouargla, Bechar, Adrar, Tamanrasset and Illizi come from far behind.
Good governance and social purpose
Satisfying the needs of a given population must obligatorily whilst considering the new transformation of the world, link economic and social dynamics to achieve some reliability.
The set of previous data shows that in the event of non-development, the demographic pressure would constitute a real social timebomb. As demographic pressure involves increasing needs such as more food consumption and durable consumer goods, more infrastructure, more schools, more training centres and hospitals. Hence the importance for any government to have a forward-looking vision
It is also a matter of thinking already of the diversification of the national economy to create more jobs to meet the needs of an increasingly demanding population. For that, with the scarcity of financial resources, which is likely to impact development projects, the urgency of a new governance re-foundation would be required.
Would it suffice to say that a reorientation of the current socio-economic policy to have necessarily a growth rate higher than the population growth rate otherwise the rate of unemployment will increase (rate of Growth greater than 7/8% over several years to create 350,000 / 400,000 new workstations per year)?
Does not this mean also the imperative to abandon the old patterns of the 1970s especially in the field of industrial policy, to adapt to the Fourth World Economic Revolution which promises to be irreversible and on us by 2020 through 2030, based on networks, more social dialogue and more decentralization, not to be confused with deconcentration.
Ademmebtoul@gmail.com