Today’s Bloomberg article by Mohammed Sergie is on Bahrain joining the 100% Debt Club as a new member. It goes without saying that Bahrain although the smallest oil producer in the Persian Gulf countries and member of the GCC has nevertheless to fend for itself on its own. How much would the GCC lend a hand to its smallest member, we still have wait and see. It needs its oil to be over $100 a barrel to balance its budget.

In the meantime, and per the IMF, Bahrain is expected to join Lebanon, Libya and Sudan in 2019 as countries in the MENA with debts that exceed 100% of their respective. GDPs.

An earlier article of Bloomberg’s could have give a hint as to the traumatic times that Bahrain would be going through. Shale gas would mean in few words, sacrificing all that sweet aquifer water element at the source of the birth of the country in the first place. 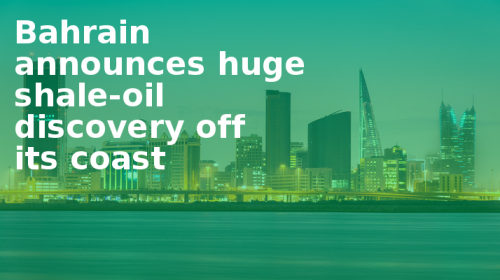 By Wael Mahdi and Mohammed Sergie

Bahrain will invite international oil companies to help it develop its first major discovery in decades, hoping to begin production within five years.

The oldest and smallest energy producer in the Persian Gulf relies on crude exports for most of its revenue, and its finances have been strained by lower oil prices. Production from the new discovery could one day reach 200,000 barrels a day, local newspaper Al-Ayam reported, citing Abdulrahman Ali Buali, a member of Bahrain’s Council of Representatives. That could help trim Bahrain’s deficit, but wouldn’t elevate it into the top ranks of global producers.

The amount of oil and gas that can be recovered from hard-to-reach pockets in shale rocks under the sea is uncertain, and development is potentially an expensive proposition. Halliburton Co. will drill two wells this year in the offshore Khaleej Al Bahrain Basin to appraise how much of the oil contained underground is actually recoverable.

“Only a fraction of the 80-plus billion barrels is likely to be recoverable,” Tom Quinn, senior analyst for Middle East upstream at consultant Wood Mackenzie Ltd., said by email. “The oil will also be technically challenging and potentially high cost to develop,” while Bahrain’s previous oil contracts offered meager returns for international oil companies, he said.

It’s not clear how much the field can produce or how much it will cost to develop, Oil Minister Shaikh Mohammed bin Khalifa Al Khalifa said at a news conference in Bahrain. International oil companies will be invited to join once there’s more data, he said. The island nation last year produced about 49,000 barrels a day of crude from its only wholly owned field, a figure it plans to double by 2020.

Tapping the shale formation will require hydraulic fracturing, commonly known as fracking, the minister said. This makes the development an “economic and technical” challenge, Sadad al-Husseini, a former executive vice president at Saudi Arabian Oil Co., the world’s biggest crude exporter, said before the press conference. “The drilling will be deep.”

Finding the new deposit is an initial step. Determining how much of the hydrocarbons can be exploited commercially and starting production from accessible reserves may be a costly, years-long effort. A single shale well onshore will cost about $7 million to drill and frack this year, according to a 2017 Citigroup estimate. A well on the new Bahrain offshore deposit will cost “no less than $20 million,” according to al-Husseini.

Bahrain estimates there are 81.5 billion barrels of shale oil and 13.7 trillion cubic feet of natural gas of resources in the basin, the oil minister Al Khalifa said. The two appraisal wells will help to determine how much of this can be produced. The waters of the Persian Gulf are shallow in that area, which will help reduce production costs, he said. Initial flow tests were positive with the reservoir rocks showing good porosity, the ministry said in an emailed statement.

In addition Bahrain’s sole wholly owned field, the country shares income from a separate deposit with Saudi Arabia that produced 153,500 barrels a day in 2016, according to the International Energy Agency. The government needs oil at $118 a barrel, almost twice the current price, to balance this year’s budget.

The newly discovered field should provide support for Bahrain’s “very strained fiscal situation,” said John Sfakianakis, director of economic research at the Gulf Research Center in Jeddah, Saudi Arabia. “It will provide additional cushion, depending on when the stream of oil comes into play and the price of oil at that point.”