An article of Asharq Al Awsat Marrakesh, Morocco by Heba El Koudsy followed by another by Abdul-Kabeer Al-Manawi and Hassan Moqna reading would give a pretty clear idea of how concerned certain governments and elites of the MENA in procuring employment to the increasingly populous and educated youth of their respective countries whilst “the importance of Arab countries continuing reforms to promote inclusive growth, empower women and the youth, support the private sector, fight corruption and counter terrorism to create an attractive investment climate.” It must be added that at this conjecture, it might not be as easy as it has generally been in the recent past. These articles cover the said happening in Morocco, but all facts relate more to the Gulf countries than to those of the Maghreb where demand for jobs vs. youth population are diametrically opposed. 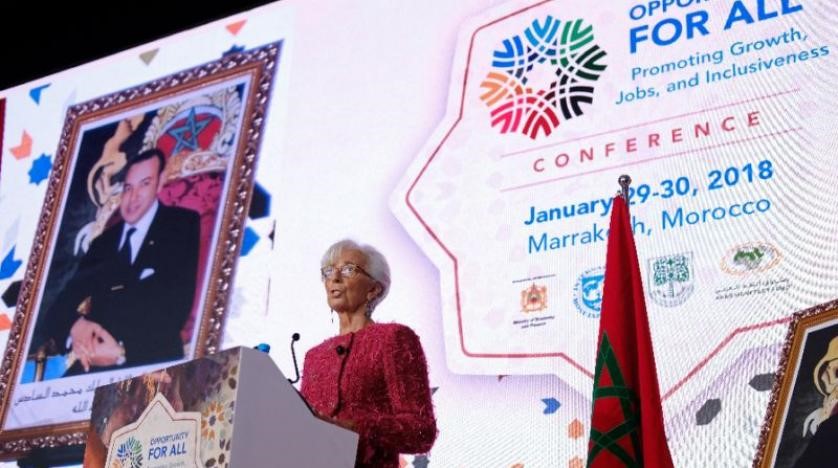 Participants in the “Opportunity for All” Conference in Marrakesh underlined the importance of continuing reforms to promote inclusive growth, empower women and the youth, support the private sector, fight corruption and counter terrorism to create an attractive investment climate.

The two-day conference, which was held on Monday, is organized by the International Monetary Fund (IMF) in Marrakesh in cooperation with the Moroccan Government.

During his speech on Tuesday, Saadeddin al-Othmani, Prime Minister of Morocco, emphasized the need to bolster reforms.

He said that changes in the global economy have resulted in economic and social challenges in most countries, including demographic transition, changes in population structure and social culture, as well as the higher aspirations of young people and women.

This necessitates the development of policies to respond to those aspirations, including raising the quality of education, health services, social coverage and employment opportunities, according to Othmani.

IMF Director Christine Lagarde focused on three points needed for the Arab region, which include the necessity for inclusive growth, change and transformation and an agenda for the whole region.

She noted that achieving growth should start with creating an active private sector to promote jobs, supporting vulnerable groups, women and the youth, and exploiting financial policies to invest in people and infrastructure.

For his part, Dr. Abdulrahman bin Abdullah Al-Humaidi, Director General of the Arab Monetary Fund, stressed three priorities in tackling the challenges of unemployment and growth in the Arab region.

He pointed out that the first was the need to achieve economic diversification in the Arab economies, while the second priority is to support entrepreneurs, and the third is to enhance access to financial services.

Humaidi explained that only 13 percent of women in the region had access to financial services, compared to 47 percent globally. He stressed the need to exploit modern technologies in financial activities and services.

Job-seekers stand in line to talk with a recruiter at a booth at a job fair in Riyadh. (Reuters file photo)

A conference held in the Moroccan city of Marrakesh witnessed a series of discussions focused on the job-creating process in regional countries.

Creating job opportunities is vital in order to absorb the millions of young people entering the labor market in coming years and is expected to be realized through utilizing new sources and reinforcing growth across sectors and getting governments to be supportive of needed policies.

Held under the theme “Opportunity for All: Promoting Growth, Jobs, and Inclusiveness in the Arab World,” the conference also focused on specific policies needed to gain new sources of growth.

Participants focused on how large-scale SME prosperity could be achieved. They also addressed education and training reform to prepare young people for employment in the private sector.

They agreed that growth has not been strong enough to reduce unemployment significantly, as 25 percent of young people in the region are jobless.

Protracted regional conflicts, low commodity prices, weak productivity and poor governance have been identified as main factors gelding back the considerable potential of the region.

In order to boost inclusive economic growth, the conference summarized the priorities of the path to be taken in Marrakesh Call for Action, which calls on governments to “Act Now” to pursue a set of actions or reforms.

The document urged for a more vibrant private sector through improved access to finance and a better business environment with fewer barriers and less red tape. It also called for leveraging technology and nurturing trade to generate new sources of growth, create jobs and foster prosperity.