Recent events have diametrically impacted these 2 long time NATO allies making Turkey and the US fall out over Syria, etc. .  The US and Turkey have released opposing accounts of a phone call between Donald Trump and Recep Tayyip Erdoğan, highlighting deepening tensions between the two countries amid a Turkish military campaign inside Syria last weekend.  Here is a commendable account written by  Bekir Varoglu, Lancaster University for The Conversation of today.

Turkey and the US are falling out over Syria, the Kurds and authoritarianism

Despite all the best diplomatic efforts, relations between the US and Turkey are visibly deteriorating. This has happened before; the last time a similar situation arose was in the late 1970s, in the aftermath of the Cyprus war, when the US slapped Turkey with arms embargoes and sanctions. But in the ensuing decades, and particularly after the 9/11 attacks, Turkey became an important American ally, held up by the US as a model combination of Islam and democracy.

But in recent years, things have changed – and the relationship is suddenly up in the air.

The mood began to sour in 2013, when the Obama administration took a dim view of Erdoğan’s crackdown on the Gezi Park protests. Things have never quite recovered. The US has for more than two years declined to cooperate with Turkey’s demands to extradite exiled religious leader Fethullah Gülen, whom Ankara blames for the failed coup against Erdoğan in 2015.

In 2017, Turkey also arrested and summoned US consulate staff whom it accuses of having ties with Gulen’s “terrorist” organisation; the two also briefly suspended all non-immigrant visa services for travel between the two countries.

Then came Donald Trump’s decision to recognise Jerusalem as the capital of Israel and move the American embassy there from Tel Aviv. A UN vote to condemn the decision saw the US humiliated by the international community – and president Erdoğan saw that Turkey played a significant role in mobilising both the Organisation of Islamic Cooperation and the UN General Assembly to vote against Trump’s wishes, despite his threat to cut aid to countries that went against him.

The Turkish-American relationship is under strain on other fronts, too. Turkey clearly has every intention of extending its influence across the Middle East and beyond, not only establishing military bases in Somalia and Qatar, but backing Qatar in its dispute with the US’s most powerful Arab ally, Saudi Arabia.

The US and Turkey had long been committed to fighting terrorist groups, with the so-called Islamic State (IS) their main target. But as far as Turkey is concerned, IS is just one group; it is vital to cooperate on all threats to its security, among which are Kurdish groups within and beyond Turkish borders.

The US takes a different view. It is reluctant to cease its support to the Syria-based Kurdish Democratic Union Party (PYD), which has declared autonomous rule in northern Syria and which the US is supplying with arms. Turkey believes that the military equipment transferred to the PYD will eventually end up in the hands of its main domestic Kurdish insurgent group, the PKK – recognised as a terrorist organisation by Turkey, the EU and the US.

This has become a serious sticking point, and it’s only getting worse. The US has just announced it will build a new 30,000-strong border security force with the PYD in order to secure the areas along Syria’s borders with both Iraq and Turkey. This fuels Turkish suspicions that the US could soon back the establishment of a contiguous Kurdish-held canton along the Turkish border – a prospect that Ankara simply cannot stomach. 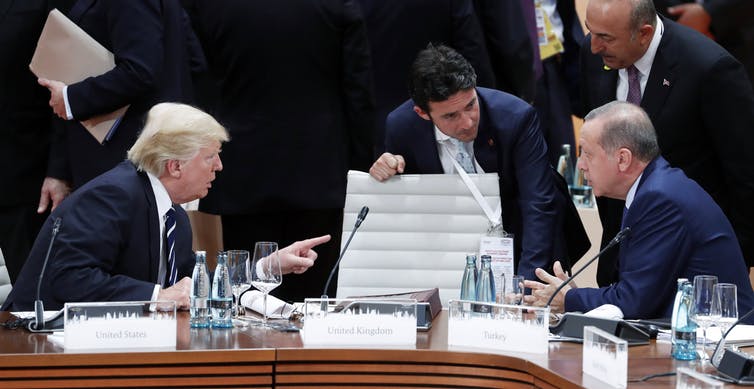 To make matters more complicated, the US and Turkey are diverging on Syria more broadly. While the US has focused on defeating IS and obstructing Iranian expansionism, Turkey has sought to maintain the integrity of Syria, opening up more distance from its NATO ally as it works ever more closely with Russia and Iran. It was Turkey, Russia and Iran who launched the ongoing Astana peace process, which established so-called “de-escalation zones” to at least try and limit the Syrian conflict.

This tripartite alliance is not without its problems. If Russia and Turkey are to cement their relationship, they must work harder to harmonise their positions, particularly on the role of the PYD and the future of Assad. Like the US, Russia has been arming the PYD in order to combat IS – but it seems that Russia respects the sensibilities of Turkey, seemingly allowing Turkey to launch air and ground attacks on Afrin unchallenged.

All the while, the US is effectively sidelined in the Syrian negotiations, and its increasingly incoherent foreign policy makes it an unreliable partner. So far, the US has tolerated the Turkish move on Afrin. But if Turkey attacks the city of Manbij, where the US has troops stationed, the tension is virtually guaranteed to mount.