An Arab Forum for Environment and Development (AFED) Conference was held in Beirut, on November 2nd through 3rd, 2017 on obviously the Arab Environment in the last 10 Years. And accordingly, a report ensued on and was published on the AFED’s website. In a few words, the overall environmental outlook in the Arab region is bleak.

The AFED produced this executive summary of that report; it is reproduced here for purposes of further spreading its message that can be downloaded from the link below.

It is a report on the dismal situation of the Arab part of the Middle East and North Africa. It notably emphasizes the following:

The Arab Forum for Environment and Development (AFED) concluded its tenth annual conference, held in Beirut on 2-3 November 2017, to discuss changes in the Arab environment during the past ten years. The conference brought together about 400 delegates from 46 countries, representing public agencies, corporations, universities, research centers and civil society.

AFED’s Secretary General Najib Saab cited draft recommendations which endorsed results of AFED report on Arab Environment in 10 Years, advocating the need to more comprehensively integrate sound management of natural and environmental resources into government decision-making processes. It also supported peoples’ demand, as reflected in the AFED public opinion survey, for stronger and swifter government action to safeguard the environment and manage natural resources sustainably. All of this entail taking immediate steps to translate declarations and strategies into actions.

The Conference recommended a series of measures that can help Arab countries to address future challenges. It called upon Arab governments to reform the current institutional framework of the League of Arab States to foster inclusive development and to realize the Sustainable Development Goals (SDGs) enshrined in the 2030 agenda, boost coordination to act as a strong regional block capable to positively contribute to international endeavors, and prioritize investing in education, innovation, and research and development. It emphasized the importance of integrating environmental management into core planning and policy formulation, implementation, budgeting and evaluation, promoting sustainable consumption and production and creating incentives that encourage private sector investments in sustainable projects.

The Conference called for adopting a more participatory and decentralized form of governance in the water sector, and for attaching priority to food security by adopting sustainable agricultural practices that boost efficiency and productivity and minimize food losses and waste. It also recommended capitalizing on the current transition to sustainable energy options, and improving air quality by deploying cleaner and renewable sources of energy for power generation, implementing efficiency measures in buildings, investing in better public transport, and accelerating the switch to hybrid, plug-in, and electric vehicles.

Commitment to regional cooperation was highlighted, where one country’s surplus balances out another’s deficit in water resources, food production, energy, research, and human capital. Governments should particularly adopt a collaborative approach to the management of shared watersheds, the development of regional climate change adaptation measures, and the building of a regional transport network.

The conference finally called for reestablishing peace and security in the Arab countries affected by conflicts and war, as a critical factor for restoring conditions conducive to sustainable development.

The conference recommendations will be disseminated to Arab governments and to regional and international agencies. 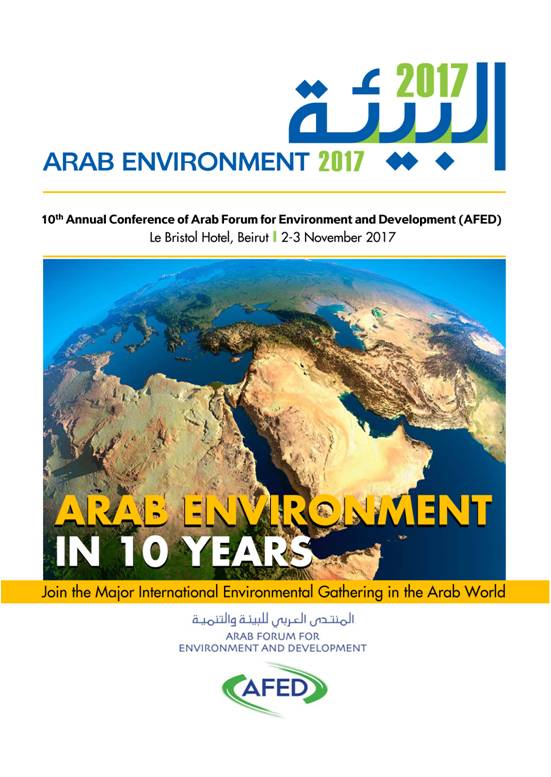 Full AFED report on Arab Environment in 10 Years can be downloaded at www.afedonline.org