Following on The GCC rift deepens helping oil prices up, the situation got apparently complicated and seems to go back to an Old Saudi Arabia’s Feud with Qatar.  For now, and according the latest newscasts of the local media, to go on worsening before any resolutions of differences are found.  The countries that decided to cut their diplomatic ties took this Tuesday morning measures such as closing landing and airspace privileges to Qatari airplanes “until further notice”.  Qatari nationals and residents were given a 2 weeks’ notice to leave their country of residence.

In a tiny peninsular desert country that is Qatar, almost totally reliant on its imports for all facets of its life, it would have now to adopt drastic changes to its sourcing of food, machinery, electronics and most importantly buildings materials and equipment for sustenance of its World Cup program.

Bloomberg published this article written by Marc Champion giving the background of the story.

Saudi Arabia’s isolation of Qatar has been brewing since 1995, and the dispute’s long past and likely lingering future are best explained by natural gas.

Not only was that the year when the father of the current emir, Sheikh Tamim bin Hamad Al Thani, toppled his own pro-Saudi father, it was also when the tiny desert peninsula was about to make its first shipment of liquid natural gas from the world’s largest reservoir. The offshore North Field, which provides virtually all of Qatar’s gas, is shared with Iran, Saudi Arabia’s hated rival.

The wealth that followed turned Qatar into not just the world’s richest nation, with an annual per-capita income of $130,000, but also the world’s largest LNG exporter. The focus on gas set it apart from its oil producing neighbors in the Gulf Cooperation Council and allowed it to break from domination by Saudi Arabia, which in Monday’s statement of complaint described Qataris as an “extension of their brethren in the Kingdom” as it cut off diplomatic relations and closed the border.

“Qatar used to be a kind of Saudi vassal state, but it used the autonomy that its gas wealth created to carve out an independent role for itself,” said Jim Krane, energy research fellow at Rice University’s Baker Institute, in Houston, Texas. “The rest of the region has been looking for an opportunity to clip Qatar’s wings.”

That opportunity came with U.S. President Donald Trump’s recent visit to Saudi Arabia, when he called on “all nations of conscience” to isolate Iran. When Qatar disagreed publicly, in a statement the government later said was a product of hacking, the Saudi-led retribution followed.

Critically, Qatar’s natural gas output has been free from entanglement in the Organization of Petroleum Exporting Countries, the oil cartel that Saudi Arabia dominates. 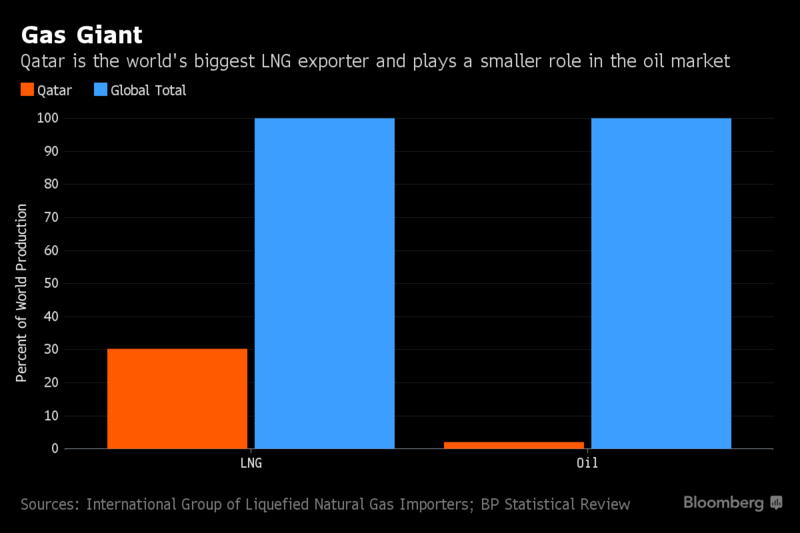 The new emir, having survived a counter-coup attempt in 1996, didn’t build pipelines that would have integrated Qatar into the markets of its Gulf neighbors. Two senior Qatari government officials alleged during the trial of the coup plotters in 2000 that Bahrain helped to organize the attempt with Saudi Arabia’s consent, according to a report by the BBC.

At the time, those much richer oil states saw natural gas as virtually worthless, useful mainly for injecting back into oil wells to improve extraction rates. They were willing to pay only a fraction of the world market price for LNG, according to a paper Krane co-authored with Qatar University’s Steven Wright.

The sole pipeline built, the Dolphin project connecting Qatar’s North Field to the United Arab Emirates and Oman, has operated at half to two thirds capacity. Contracts signed last year should fill the rest, yet the vast majority of Qatar’s exports will continue to go to markets in Asia and Europe.

More recently, demand for LNG to produce electricity and power industry has been growing in the Gulf states. They’re having to resort to higher-cost LNG imports and exploring difficult domestic gas formations that are expensive to get out of the ground, according to the research. Qatar’s gas has the lowest extraction costs in the world.

Qatar gas wealth enabled it to develop foreign policies that came to irritate its neighbors. It backed the Muslim Brotherhood in Egypt, Hamas in the Gaza Strip and armed factions opposed by the UAE or Saudi Arabia in Libya and Syria. Gas also paid for a global television network, Al Jazeera, which at various times has embarrassed or angered most Middle Eastern governments.

Read More: Q&A on Why Qatar Angers Saudi Arabia and Its Allies

Above all, gas prompted Qatar to promote a regional policy of engagement with Shiite Iran to secure the source of its wealth.

Gas isn’t the immediate cause of the current showdown, but “you can question why Qatar has been unwilling to supply its neighboring countries, making them gas poor,” said Wright, the academic, speaking by telephone from the Qatari capital Doha. “There probably was an expectation that Qatar would sell gas to them at a discount price.”

Adding to regional frustrations, in 2005, Qatar declared a moratorium on the further development of the North Field that could have provided more gas for local export.

Qatar said it needed to test how the field was responding to its exploitation, denying that it was bending to sensitivities in Iran, which had been much slower to draw gas from its side of the shared field. That two-year moratorium was lifted in April, a decade late, after Iran for the first time caught up with Qatar’s extraction rates.

“People here are scratching their heads as to exactly what the Saudis expect Qatar to do,” said Gerd Nonneman, professor of international relations and Gulf studies at Georgetown University’s Doha campus. “They seem to want Qatar to cave in completely, but it won’t call the Muslim Brotherhood a terrorist organization, because it isn’t. And it isn’t going to excommunicate Iran, because that would jeopardize a relationship that is just too fundamental to Qatar’s economic development.”