What impact will it have on the price of oil in the future?

The May 25, 2017 OPEC and non-OPEC agreement extension meaning on their production cut through to the first quarter of 2018, is for many from within as well as without, about questioning not only its price but notably its future. And yet the next day, oil price was quoted at midday, at $49.87 a barrel for the WIT and $52.26 for Brent with $1.118 a Euro and the price of natural gas at $3.24 the MBTU.

Let us reminder the Vienna agreement of December 2016.

This started it all this time over with by following on the high-level Committee’s work that ironed out tensions particularly between Saudi Arabia and Iran, the meeting in Vienna of December 2016 has helped the disparate OPEC and non OPEC countries to reach an agreement to reduce and for the first time since 2008 off the supply of oil up to 1.8 million barrels per day.  According to the Vienna agreement of December 2016, the production limits of the agreement affected 11 of the 14 member countries of OPEC.

The bulk of the agreement of November 30, 2016 was to be carried by the biggest producers of the cartel: Saudi Arabia, Iraq, United Arab Emirates, Kuwait, whilst Iran, Nigeria and Libya have been exempt.  Only Iran received the most favourable reference with a selected volume of 3.97 Mb/d (against a level of 3.69 Mb/d, although the Iran wants its production dates back to 4.2 Mb/d.  Saudi Arabia world’s leading exporter of oil, has agreed to bring its production to 10.06 million barrels per day (BPD) and thus reduce its production of 500 000 barrels. 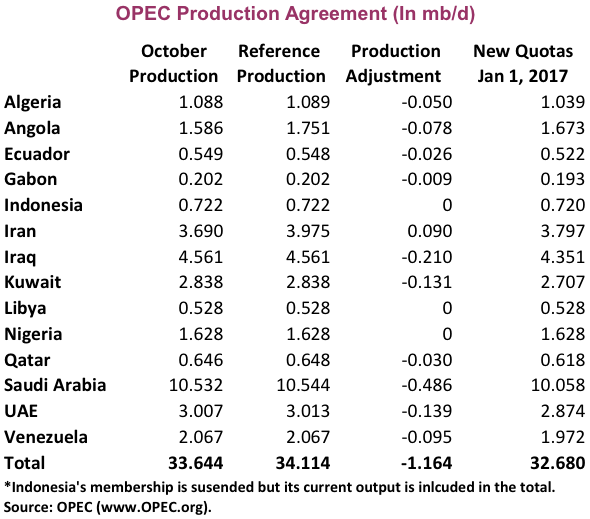 Ten other countries outside OPEC were concerned by the agreement with an additional drop as follows:

As can be seen, most of this decline is ensured by the two largest producers of this heterogeneous group: i.e. Russia (-0.3 Mb/d) and Mexico (-0.1 Mb/d).

OPEC and non OPEC countries decided in Vienna to maintain the level of production set in their previous agreement, which remains in force until March 2018. This decision was taken at the 172nd ordinary ministerial meeting of the organization which was, among other things, devoted to the review of the measures that are needed in the light of the evolution of the international oil market, mainly the issue of the renewal of the agreement on the limitation of production which was set to expire by end of next June.

The nine month extension of this agreement is intended to stabilize the oil markets.  Member countries and non-members of OPEC, having fully met their commitments, thus seek to continue their efforts to rebalance the market, long plagued by a huge fall in prices due mainly to an abundant supply and speculation.  But this choice did not convince the market and is illustrated by the loss of influence of the Organization on the oil market and the perverse effects of the rentier factor on the economies of these countries.  However, the loss of market share helped hoist the WTI price to the range of $50-55 against $40-50 dollars between April and November 2016.  It seems that OPEC has under-estimated the ability of independent American producers to adapt, the latter having improved their technical efficiency in the reduction of 40 / 50% off their production costs, marginal wells becoming profitable on average from $45 a barrel for marginal fields and between $30/40 for large and medium reservoirs.

The risk with this renewal is therefore, in order to support the price of the barrel, with the increased production of other producers, notably the United States at the top that would balance supply and demand around $50-55 a barrel. However, according to an international study, this is relative. OPEC countries would not lose money, where the average production cost of a barrel of crude being around $20, and operating beyond their means to especially buy a fictitious social peace.

According to OPEC the difference between $102 and $45 since June 2014 has caused a loss of $1,000 billion in terms of revenue and $1,000 billion in terms of investment losses.  At a $55 a barrel, reduction would cause a loss of 3,780 million barrels per year and about $219 billion for OPEC countries.  Hence the reduction of public spending were rapidly adopted, with possible social tensions posing the urgency of deep structural reforms in order to “get clean of the rentier drug” to avoid ending up in the Venezuela’s situation.

Thus, Saudi Arabia counts of taking into its stock market its State oil company, ARAMCO over the next 18 months including the valuation of this introduction, which will be the largest of any stock market history.

What have we learned?

For starters and excepted for Iraq, compliance with the agreed quotas within OPEC was very strong. Non-OPEC’s production reductions were less impressive over the initial six-month period but, the display of unity in Vienna during the May 25, 2017 was quite a change from the past, and the understanding between the Saudis and the Russian officials was particularly important.

Apart from that the big problem will be to review the policy of subsidies from fossil fuels that penalize energy transition. Each year in the world, $5.300 billion ($10 million per minute) is spent by the States to support fossil fuels, according to estimates of the IMF report for COP21.  However, it seems that the majority of the leaders of the world have become aware of the urgency to go towards an energy transition.

Because if the Chinese, the Indians and the Africans had the same energy consumption as that of the US, we would then need five planets Earth.  In the event of a change in the model of energy consumption at the global level, (the future in 2030 being hydrogen), it will influence the level of prices of fossil down. Although representing the largest world reserves, OPEC has no more the same impact on the market than in the 1970s.  Prior to deciding on a reduction in output of 1.2 million barrels / day, it represented only 33% of global marketed world production, the remaining 67% being out of OPEC.

A recovery in the price of a barrel to $60 and depending on the growth of the global economy, may translate into an increase in supply which would be due to the increase in the production of countries non-OPEC including the USA.  Would not then OPEC likely to lose its market share?

Saudi Arabia represents more than 33% of the share of OPEC production and together with the Gulf countries they account for 60%.  For countries outside OPEC, the most important traditional producer being Russia that prior to the agreement of 10 December 2016 produced more than 11 million barrels / day in December 2016 against 10 million barrels day in January-February 2016.

This has not been penalized by the agreement of December 10, 2016.   But many experts wonder about the temptation for producers to “makeup” natural declines, linked to the depletion of some deposits and already integrated forecasts, in order to go for voluntary reductions.

Leader of the cartel, Saudi Arabia had long maintained a policy of low prices, hoping to shut competitors, including American shale oil producers out of business.  Indeed, according to Bloomberg in February 2017, non-conventional oil producers have made huge efforts to reduce their levels of profitability, earning money with around $50 a barrel, while it took at least $70 to $80, two years ago and $30 in some Texas counties where investments should increase by 30% in the sector by 2017.

Thus, the production of oil from shale in the United States that currently stands at 4.5 million barrels (almost half of record production) could rise by 500,000 barrels. As a result, according to Reuters, oil producers are refinanced with banks and 34 companies have seen their credit lines increased by an amount of $30.3 billion.

The structuring of the world economy growth and the new global energy configuration that is looming in 2017 to 2030, will in future be the determinants so the price of oil than natural gas. For Algeria which 98% of foreign exchange earnings come directly and indirectly from hydrocarbons and their derivatives, and due to the fact that there is not a clear strategy of production and non-oil exports, it must be attentive to the evolution of the price of not only oil but also of gas that normally represent 33% of revenues of the Algerian State oil company SONATRACH.

The only solution for Algeria’s international commitments is to think of a new model of energy consumption (more energy efficiency and renewable energy), assuming a review of the policy of targeted subsidies (gas consumption by 2030 exceeding exports), action on costs so as to be competitive (possibly reducing between 15 to 20%), all referring to a strategic vision of the new model of socio-economic policy and a new management of SONATRACH.

We are in fact witness to the advent of an entire range of new technologies for energy efficiency in the majority of Western countries, with a forecast of 30% discount representing savings on energy and adoption of sustainability criteria in all development that challenging Algeria’s two million homes building a year.

In short, re-balancing of the market depends on a number of exogenous factors that are outside of the OPEC countries’ control.  Financial strains in many oil exporting countries would reduce the ability of these countries to soften the blow, resulting in a significant drop in their domestic demand. To stick to the basics, so as to not mislead public opinion, a dramatic rise in the oil price should not be expected anyway.