Following our article “The end of ever-rising consumption of Oil is in sight” here is something that is close and related to that, e.g. Self-driving cars.  It is about when will robotics be applied to our transportation modes and be made accessible to the public at large.

Automation and Artificial Intelligence that are obviously required in any self-driving vehicle have been in and out of our life for so many years that I personally cannot recall anytime without it either hearing and / or being talked about it, disserted on, etc.  As a matter of fact, there has never been in the technological world as much change as there is now and still is.

The prevalence of the combustion engine car has never been as much under question as it is now because of its direct impact on the environment.

There is still strong belief however (as per confirmed forecasts) that the number of this type of cars worldwide will increase from less of today’s billion to something short of 2 billion by 2035 whilst that of the electric car would be from 0.1% to 6% of that figure.

McKinsey Automotive & Assembly in an article covering their insights produced an enlightening review of the on-going work in progress.  Here it is with our compliments to the team of authors.

Self-driving car technology: When will the robots hit the road?

As cars achieve initial self-driving thresholds, some supporters insist that fully autonomous cars are around the corner. But the technology tells a (somewhat) different story.

The most recent people targeted for replacement by robots? Car drivers—one of the most common occupations around the world. Automotive players face a self-driving-car disruption driven largely by the tech industry, and the associated buzz has many consumers expecting their next cars to be fully autonomous. But a close examination of the technologies required to achieve advanced levels of autonomous driving suggests a significantly longer timeline; such vehicles are perhaps five to ten years away.

The first attempts to create autonomous vehicles (AVs) concentrated on assisted-driving technologies (see sidebar, “What is an autonomous vehicle?,” for descriptions of SAE International’s levels of vehicle autonomy). These advanced driver-assistance systems (ADAS)—including emergency braking, backup cameras, adaptive cruise control, and self-parking systems—first appeared in luxury vehicles. Eventually, industry regulators began to mandate the inclusion of some of these features in every vehicle, accelerating their penetration into the mass market. By 2016, the proliferation of ADAS had generated a market worth roughly $15 billion.

Around the world, the number of ADAS systems (for instance, those for night vision and blind-spot vehicle detection) rose from 90 million units in 2014 to about 140 million in 2016—a 50 percent increase in just two years. Some ADAS features have greater uptake than others. The adoption rate of surround-view parking systems, for example, increased by more than 150 percent from 2014 to 2016, while the number of adaptive front-lighting systems rose by around 20 percent in the same time frame (Exhibit 1). 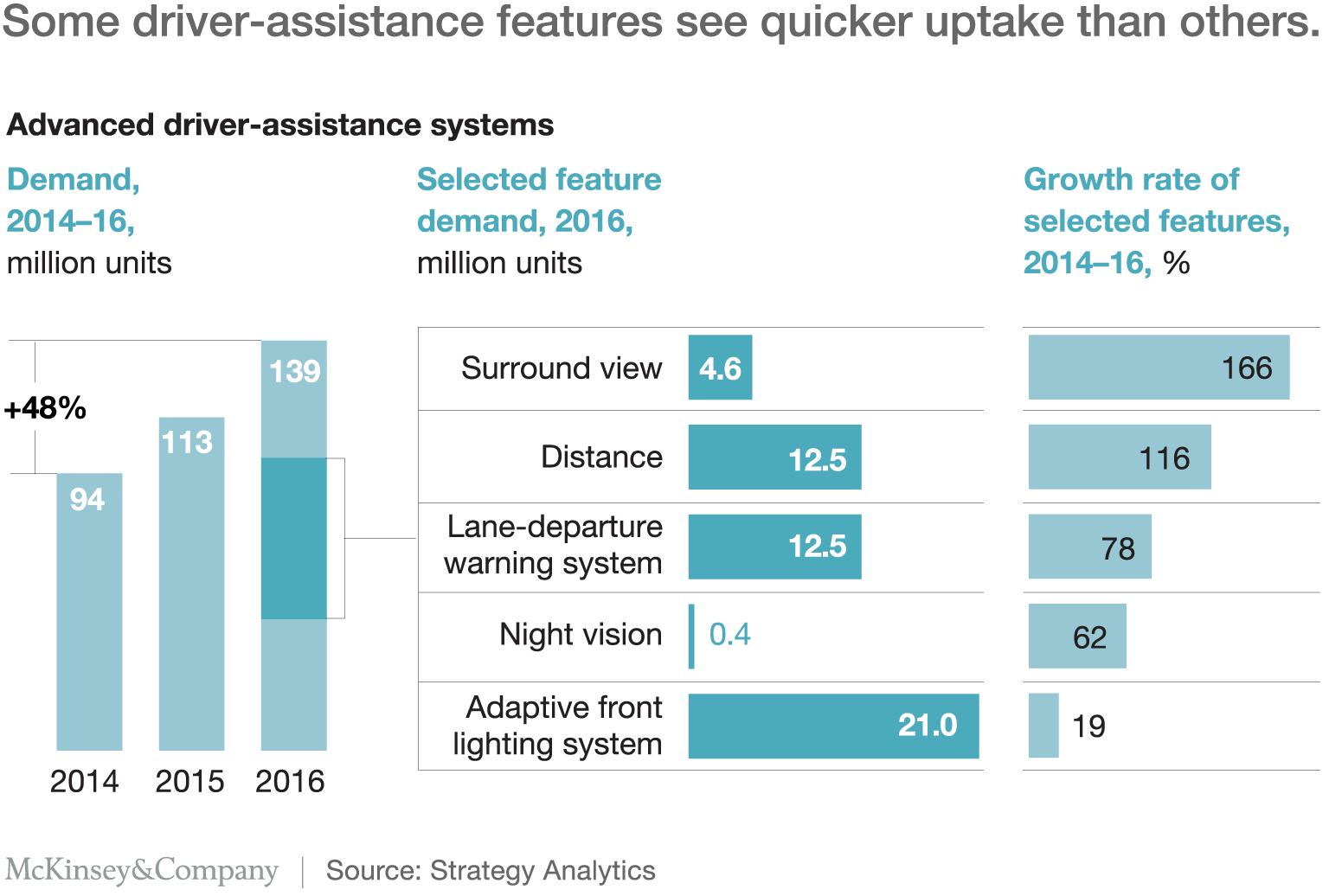 Both the customer’s willingness to pay and declining prices have contributed to the technology’s proliferation. A recent McKinsey survey finds that drivers, on average, would spend an extra $500 to $2,500 per vehicle for different ADAS features. Although at first they could be found only in luxury vehicles, many original-equipment manufacturers (OEMs) now offer them in cars in the $20,000 range. Many higher-end vehicles not only autonomously steer, accelerate, and brake in highway conditions but also act to avoid vehicle crashes and reduce the impact of imminent collisions. Some commercial passenger vehicles driving limited distances can even park themselves in extremely tight spots.

But while headway has been made, the industry hasn’t yet determined the optimum technology archetype for semiautonomous vehicles (for example, those at SAE level 3) and consequently remains in the test-and-refine mode. So far, three technology solutions have emerged:

The cost of these systems differs; the hybrid approach is the most expensive one. However, no clear winner is yet apparent. Each system has its advantages and disadvantages. The radar-over-camera approach, for example, can work well in highway settings, where the flow of traffic is relatively predictable and the granularity levels required to map the environment are less strict. The combined approach, on the other hand, works better in heavily populated urban areas, where accurate measurements and granularity can help vehicles navigate narrow streets and identify smaller objects of interest.