The Construction Industry is as per Wikipedia defined as differing from manufacturing in that manufacturing typically involves mass production of similar items without a designated purchaser, while construction typically takes place on location for a known client. Construction as an industry comprises six to nine percent of the gross domestic product of developed countries.  This segment of any country’s development is presently undergoing changes that could be perceived as an on-going Revolution in all Trades of the Construction Industry.

In the MENA’s petro-economies, the construction boom of the last 30 years plummeted these last couple of years following the oil price drop related restrictions on investments. Some form of sustainability concern came to be considered more seriously with a view to reducing costs. It has been noticed mainly in the building material production and engineering that most of it is realised. This below reproduced article written by Andrea Willige, Formative Content and published on the WEF website on Friday 3 March 2017 gives us an idea on the latest in the Construction Industry’s on going changes worldwide. The MENA represented by Burj Khalifa that apart from being the tallest built piece of construction, would appear to, apart from also being champion of the selfie taking, add little substance in terms of technological innovation.

6 buildings that are revolutionizing the construction industry

In 1950, the fishing village of Shenzhen in south-east China had just over 3,000 inhabitants. By 2025, this number will exceed 12 million. And Shenzhen is not alone. Urban areas around the globe are growing by 200,000 people per day, and all these people will need affordable housing as well as social, transport and utility infrastructure.

This is the starting point for a new report by the World Economic Forum and Boston Consulting Group entitled Shaping the Future of Construction. Inspiring innovators redefine the industry. It highlights six buildings and four flagship projects that demonstrate the innovation in construction that the world needs in order to meet this enormous challenge. 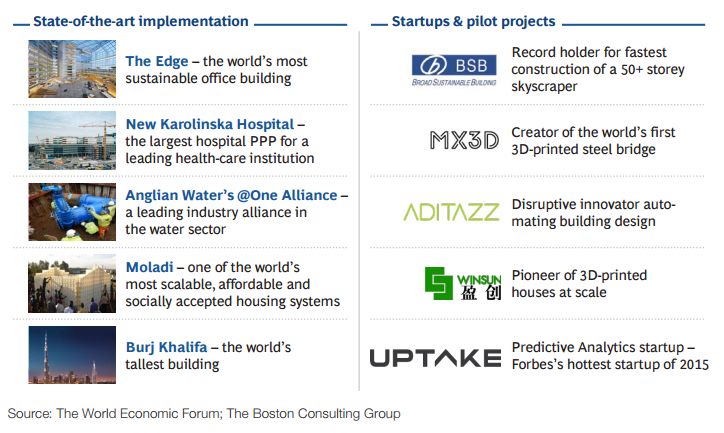 The world’s most sustainable and connected office

Producing more energy than it consumes, the Edge is widely regarded as the most sustainable office building in the world. The multi-storey, north-facing glass atrium admits lots of daylight while concrete walls on the south facade absorb heat from sunlight, and solar panels convert that sunlight into energy. A single network controls every technical system in the building, including a network of tens of thousands of sensors placed around the building. The lift, the lighting and cooling systems, coffee machines and towel dispensers, even the robot security guard which cruises around the building at night, can all be controlled and adjusted centrally.

Combined with a hot desk approach to working, the technological flexibility of the building means that its 1,100 workspaces can serve more than 2,500 staff.

How to make healthcare infrastructure smarter

When completed later in 2017, the New Karolinska Solna (NKS) University Hospital in Stockholm will have over 12,000 rooms, 35 operating theatres and 17 MRI scanning units. It is considered to be the world’s largest public-private partnership project.

The NKS contract required the use of Building Information Modelling (BIM), which provided a single system for designers, contractors and facilities managers to collaborate on. All information relating to the hospital’s design, construction and inventory is stored digitally. Ultimately, BIM data will enable the hospital facilities to be managed comprehensively and serve as a map for 29 automated, guided vehicles which will deliver medical supplies, laundry and other items around the site.

NKS will also be climate-neutral, thanks to its energy-efficient insulation, a geothermal energy plant and the use of food waste for biogas.

How to build social amenities faster and more affordably

Creating low-cost housing and social infrastructure is a challenge across the globe. A project to create much-needed courthouses in Tanzania may have shown a way ahead.

The Moladi construction system replaces the cumbersome bricklaying process with an approach akin to injection moulding. Workers erect the building’s frame with reusable plastic panels, leaving wall cavities which – once the windows, doors, wiring and pipework have been put in – are filled with a fast-setting, aerated mortar.

The building process can be monitored by just one qualified supervisor who manages local workmen with no prior construction experience or skills.

The first project, Kibaha District Courthouse, was built for $250 per square metre, which is half the cost of conventional methods. It took six months to complete when it might typically have taken up to three years using traditional methods. On the back of this success, the Tanzanian government has committed to building another 11 district courthouses using this method.

By 2050, two-thirds of the global population will live in cities. In many urban centres, there will be a shortage of space on the ground, and expanding outwards won’t be an option. Instead, cities will need to build upwards to accommodate their workforces and residents.

The idea behind the design of the Burj Khalifa in Dubai – now a popular tourist attraction – was to create a mixed-use modern skyscraper with hotel accommodation, residential apartments and commercial premises. Not so much a building as a vertical city.

The report credits the realization of this vision to securing the backing of the authorities, including the ruler of Dubai, Sheikh Mohammed Bin Rashid al Maktoum; close collaboration among all contributors; using pre-fabrication to speed construction; and pioneering the use of innovative technologies such as self-climbing cranes.

The Burj Khalifa is now the third most popular “selfie” attraction in the world, after the Eiffel Tower in Paris and Disney World in Florida.

It is hoped that a printed steel pedestrian bridge in Amsterdam will show that additive manufacturing techniques, or 3D printing, can work outside the lab in the real world.

The bridge aims to showcase the technology’s viability and potential to the construction industry, while also contributing to developing a strong supply chain and customer interest in 3D printing projects of this scale.

In addition to speed and time of construction, 3D-printing technology offers environmental benefits, too. Being managed digitally from the design to the production phase, it generates no waste and there’s little need for rework. Materials savings through optimized shapes also mean that 3D printing is a highly eco-friendly technology.

The bridge is scheduled to be printed by the end of 2017 and installed at the beginning of 2018.

In China, meanwhile, Winsun is pioneering large-scale 3D printing. In 2014 it succeeded in printing its first house, and then created a printed housing estate. Since then, it has also delivered the first 3D-printed office building, in Dubai.

Compared with traditional on-site construction, the Winsun process saved about 80% on construction costs and 60% on both labour and waste.

In addition to these flagship buildings, the World Economic Forum and BCG also highlight a series of projects pioneering new approaches to construction.

Anglian Water is the largest water and wastewater company in England and Wales (by geographic area). To ensure that the growing need for water and sewerage infrastructure can be met more cost-effectively, sustainably and quickly, Anglian joined forces with a number of its suppliers in the @one Alliance. The alliance tackles construction projects in a collaborative manner and relies on using standardized products and technology to manage the supply chain and associated ecosystem.

The Chinese BROAD group is applying manufacturing principles to the construction of sustainable high-rise buildings. The group builds skyscrapers using pre-fabricated elements such as floor plates and steel columns, which are manufactured offsite and trucked to the building site.

Its “flat-pack” approach to construction has significant time and cost advantages: a 57-storey building was erected in just 19 days, and the cost reduction relative to traditional building methods is estimated at between 20-40%. To top it off, BROAD’s skyscrapers deliver five times the energy efficiency of conventional Chinese buildings.

Knowledge transfer is at the heart of Aditazz’s new approach to design: the Silicon Valley start-up proposes to use design thinking and automation from the semiconductor sector and apply it to construction. By automating complicated, often mundane tasks and eliminating errors and omissions in real-world projects, productivity can be improved by around 30%, while cutting upfront costs by 10% and saving a further 10% over the lifespan of the building.

The engineering and construction industries tend to be cautious when it comes to automation and digitalization, so it’s not surprising that the ever-growing amounts of data generated are not always used to their fullest potential.

Uptake is a predictive analytics platform that is hoping to change this. It uses real-time and historical data from heavy equipment as well as weather and environmental information to help construction companies use their equipment better. For example, construction firms can prevent unscheduled downtime, make machinery last longer while also improving equipment dispatching and planning.

Challenges for the engineering and construction sector

Compared with many other industries, the construction industry has traditionally witnessed slow technological progress and has remained rather set in its ways. It therefore faces a steep learning curve if it is to meet the requirements of creating ever more human living space fast and in a cost-effective and sustainable way, the report suggests.

The above projects have in common a high level of automation, standardization, collaboration, cross-sectoral knowledge transfer and openness to experimentation. Adopting some if not all of these approaches could be the way forward for the sector.