The World Bank produced the following article on Year 2016 Review using 12 Charts.  It is written by  Tariq Khokhar  with co-author: Donna Barne on December 22nd, 2016.  We republish the first 7 items of the article here and would seriously recommend reading the rest in its original publication by clicking the article title below.  One would also notice that the video in question in the article can be visualised only in its original bedding.

Between the social, political, and economic upheavals affecting our lives, and the violence and forced displacement making headlines, you’d be forgiven for feeling gloomy about 2016. A look at the data reveals some of the challenges we face but also the progress we’ve made toward a more peaceful, prosperous, and sustainable future. Here are 12 charts that help tell the stories of the year.

1.The number of refugees in the world increased.

At the start of 2016, 65 million people had been forcibly displaced from their homes, up from 60 million the year before. More than 21 million were classified as refugees. Outside of Sub-Saharan Africa, most refugees live in cities and towns, where they seek safety, better access to services, and job opportunities. A recent report on the “Forcibly Displaced” offers a new perspective on the role of development in helping refugees, internally displaced persons and host communities, working together with humanitarian partners. Among the initiatives is new financial assistance for countries such as Lebanon and Jordan that host large numbers of refugees. 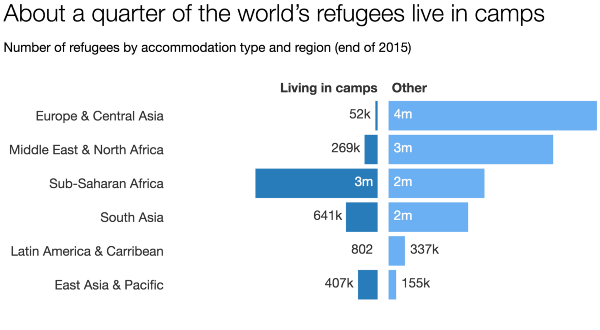 The pact negotiated in Paris in 2015 was ratified by 118 of the 194 countries that signed it, triggering new commitments to combat global warming. One of the agreement’s major goals is to promote a shift to low-carbon energy. Demand for renewable energy is picking up in developing countries as prices decline. In May, Africa saw its lowest solar price to date when the winning bid to develop large-scale photovoltaic solar plants in Zambia came in at 6 cents per kilowatt hour – or 4.7 cents/kwh, spread over 20 years.  That followed bids as low as 3 cents in the United Arab Emirates and 4.5 cents in Mexico. Renewables are now cost competitive in many markets and increasingly seen as mainstream sources of energy, according to REN21.

In 2016, global trade growth recorded its weakest performance since the global financial crisis. Trade volumes stagnated for most of the year, with weak global investment playing an important role, as capital goods account for about one third of world goods trade. Trade has been a major engine of growth for the global economy and has helped cut global poverty in half since 1990. A trade slowdown, therefore, could have implications for growth, development, and the fight against poverty. 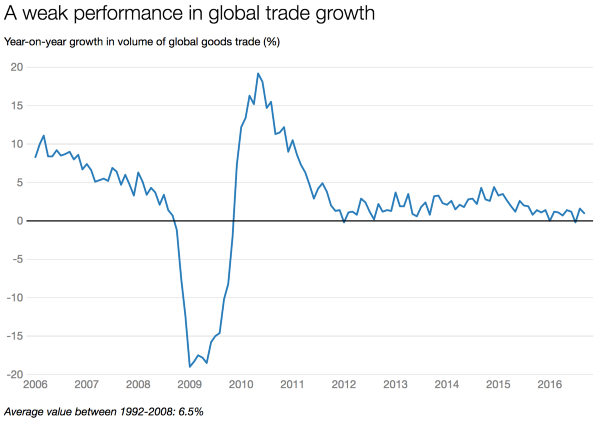 Access to mobile phones has surged in low- and middle-income countries, but many of the other benefits of the digital revolution – such as greater productivity, more opportunity for the poor and middle class, and more accountable governments and companies — have not yet spread as far and wide as anticipated, according to the World Bank’s 2016 World Development Report on the Internet, “Digital Dividends.” The report says greater efforts must be made to connect more people to the Internet and to create an environment that unleashes the benefits of digital technologies for everyone.

One third of the world’s 1.8 billion young people are currently neither in employment, education nor training. Of the one billion more youth that will enter the job market in the next decade, only 40% are expected to be able to get jobs that currently exist. The future of work is changing, and the global economy will need to create 600 million jobs over the next 10 years to keep pace with projected youth employment rates.

The UN estimates that 2.4 billion people still lack access to improved sanitation facilities, nearly one billion of whom practice open defecation. Good sanitation is a foundation for development – conditions such as diarrhea are associated with poor sanitation, and left untreated, can lead to malnutrition and stunting in children. This year’s first High-Level Panel on Water brought together world leaders with a core commitment to ensuring the availability and sustainable management of water and sanitation for all. 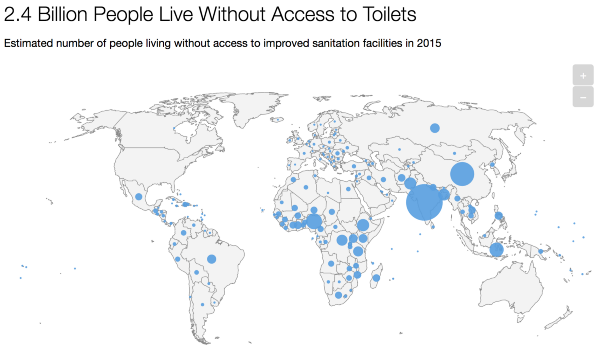