The World Economic Forum (WEF) published the following article on November 1st, 2016.  It is about the sadly unfortunate situation of Zimbabwe and is reproduced here below.  Generally, the MENA region countries being by any means far from that conjecture, and as the article dwelling on all aspects of inflation, they should not overlook it.  Professor Dr A. Mebtoul developed an essay on practically the same topic, i.e. currency management but on Algeria.  His main concern would be the process of Algeria’s currency rating between 2017 and 2020, and ,

What of its foreign exchange reserves ?

There is definitely a dialectic relationship between the hydrocarbons exports revenues evolution, the level of foreign exchange reserves and the rating of the Algerian Dinar (DZD).

Since the country’s economic growth and employment rates, through public expenditure, the level of foreign exchange reserves and the value of the DZD, depend directly and / or indirectly for more than 70% of the hydrocarbons rentier revenues, which represents with their derivatives more than 97% of all exports.  In addition, taking into account the demographic structure, the State pension funds live off the same source.  This latter is a very sensitive issue whereby the importance of transparency in any of the decisions, especially in the supporting social dialogue.

However interesting it is to know the evolution of the DZD in that time gap, it is fundamental to recall that it was at the time on a par with the French Franc.  Thus 1 DZD = 1 FRF in 1971 and 1 DZD = 0.84 US$ in 1985.  The graph below illustrates its timeline evolution since then.

2 – Mechanisms of the rating of the Dinar

The Algerian economy is an economy fundamentally of the rentier type, contradicting the basic laws of economy where any devaluation in principle should boost exports.   The slow devaluation of the DZD has produced the opposite effect showing that the blocking is indeed of a systemic nature.

Hoarding creates no value. It is productive work by continuous innovation, adapting to this world that is more and more interdependent, turbulent and in perpetual upheaval that is the source of the wealth of a Nation.  The value of a currency depends on the confidence in an economy and its underlying policies, and of its production and productivity.  Algeria, paradoxically, contradicts the basic economic rules, when the price of the Dollar is rising, and the Euro rate is declining, the Bank of Algeria tend for political reasons to somehow devaluate the Dinar relatively to both the Dollar and the Euro so that the Dinar in a real market economy should appreciate against the currency whose value drops to the level of the international market.

So why then is this accounting device for?

The main reason is that by devaluing the Dinar against the Dollar, we will have an artificial increase in oil tax that fluctuates depending on the price, translating the foundation of a rentier economy. Because oil and gas revenues are converted into Dinar, for example from 70 Dinars to 100 Dinars a Dollar currently.  It is the same for all imports in foreign currencies, customs taxes are calculating on the part in Dinar, this devaluation accelerates domestic inflation.  The ‘skidding’ of the Dinar against the Euro and the Dollar inflates both hydrocarbons as well as the ordinary taxation (imports in Euros) hence hiding the importance of the budget deficit, the actual effectiveness of the budget of the State through public spending and has artificially been inflated in the past Regulatory Fund’s revenue calculated in DZD that could run out by end 2016. Inflation is therefore the result that reinforces distrust in the DZD whose official rate is administered as if disconnected with the more realistic parallel market one.

2 – Rentier economy, low productivity, reasons for the weakness of the rating of the Dinar

According to a report by the OECD, the productivity of the work of Algeria is one of the weakest in the Mediterranean basin.  The no proportionality between public spending and the low impact, the average growth rate did not exceed 3% (it should have been more than 10%) is a source of inflation and explains the deterioration in the rating of the Dinar.  Any decline in foreign reserves would automatically bring in devaluation like for a number of oil-producing countries with large populations.

The Gulf countries, with very small populations and for a few with a diversified economy, with high revenues in addition to important sovereign wealth funds are an exception.  If tomorrow Algerian foreign reserves tended towards nil, the Government would be forced into a very sharp devaluation to about DZD200 a Euro and the parallel market exchange would be then at DZD250 a Euro.  To guard against this depreciation leading inevitably to inflation, and therefore deterioration of the DZD, the Algerian citizen does not place his assets in land, real estate or gold, but a portion of his savings in hard currencies.

3 – Reasons for the distortion of the Dinar between the official and parallel market?

Algiers’ Port-Said Square is considered to be open sky parallel bank functioning as an exchange centre and where prices evolve on a day to day basis.  In fact, the essence of this situation lies in the dysfunctions of the different structures of the State because of the heavy handed and excessive state interventionist behaviour which distorts the market rules forcing households and operators to circumvent the laws and regulations.  So when public authorities are taxing (excessive taxation) and regulate excessively or by declaring illegal the activities of the free market, it skews the normal relations between buyers and sellers. In response, buyers and sellers naturally seek ways around the obstacles imposed upon them by the Government.  They develop instead this informal sphere where informal agreements more credible than those of the State as based on trust between business es.

4 – Deep reforms are condition for a diversified economy

The World Bank has in a comprehensive report on the MENA region by end July 2016 provided foreign exchange reserves for circa 2018 to be $60 billion.  The period 2017-2020 is also no different, according to the same report, especially with regards to the rise in the price of oil.  A rebalancing will operate on the global oil market at the beginning of the year 2020, at prices between $53 and $60 a barrel, although with the Algiers agreement pending the meeting in Vienna on November 30, 2016, it is hoped an equilibrium price between $50 and $55 (the IMF providing for an average of $53 and $55 for 2017).  Ultimately everything will depend on the growth of the world economy and especially that of China.

In strictly economic terms, the currency is before anything a social rapport tool that is function of the level of economic and social development, reflecting the confidence or not between the State and the citizen.  Distortions between the official and informal markets reflect the weakness of a non-competitive and a non-productive economy in the era of globalization; revenues of oil exports allow only a formal and artificial rating to the Dinar, whilst the informal parallel market reflects its true value.  As objective an analysis of inflation, artificially compressed by the generalized and non-targeted subsidies and social transfers with often badly managed produced an untenable situation in Algeria with an estimated 27 to 28% of GDP that has an impact on the depreciation of the Dinar would mean to grasp the dialectical relationship between development, the distribution of income and consumption by social strata model.  The solution lies in new governance, new regulation mechanisms, affecting the revitalization of local production in value segments added to breast of internationalised streams.

Do you have change for a billion? The mad world of Zimbabwe’s currency

There has been a rather hostile reception from Zimbabweans to plans for new ‘bond notes’.

If President Mugabe was expecting his people to welcome news that the country was to get its own currency again, he will have been sorely disappointed.

There has been a rather hostile reception from Zimbabweans to plans for new ‘bond notes’, pegged to parity with the US dollar.

For the past seven years, the country has been running entirely on foreign currency after 500 billion percent inflation led to the national dollar being abandoned.

The new bond notes are an attempt to complement those foreign currencies, which are in short supply following a collapse in exports.

Despite the promise that the new notes will mirror the US dollar’s value, many are sceptical after what happened last time they trusted local currency.

Zimbabwe was once so gripped by hyperinflation that the central bank could no longer afford paper on which to print practically worthless trillion-dollar notes.

It is interesting to note that the country is now grappling with the opposite problem.

Like Britain, Japan, the US and other nations dealing with the consequences of weak demand and cheap oil, Zimbabwe is threatened more by the prospect of falling prices. But that doesn’t mean its people are ready to trust that hyperinflation won’t happen again.

Large denomination notes are not the preserve of developing nations, though.

The United States printed high value notes until in 1969 when denominations of US currency over $100 were declared obsolete by executive order of President Nixon, partly due to concerns about their use in organized crime.

The largest denomination bill printed by the US was the $100,000 gold certificate, with a portrait of President Woodrow Wilson.

Atlas Obscura says 42,000 of these were printed in the 1930s for use within the Federal Reserve. They are considered government property and illegal for collectors to own, but one specimen is kept by the Smithsonian.

The European Union currently uses a €500 note but Italy printed a 500,000 lire note until it adopted the single currency. 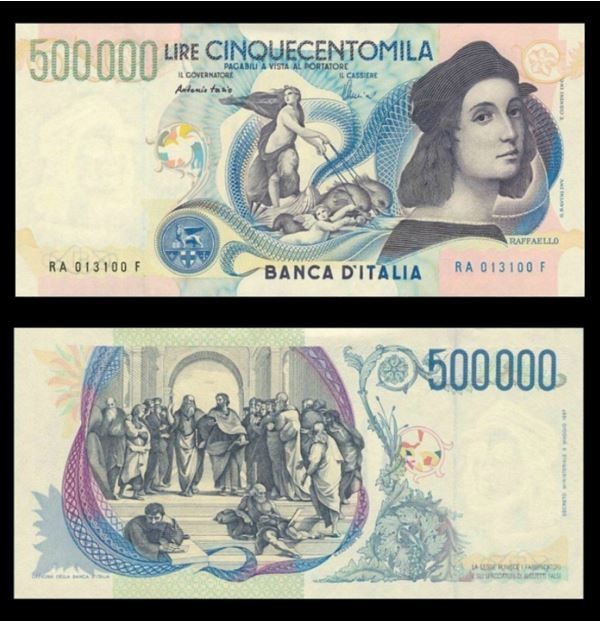 The worst case of hyperinflation is regarded as being in post-war Hungary. During this period a 100 million billion pengő bill was issued but was still not enough to buy anything of real value.

Hungary introduced its new currency in 1946, the forint, and a famous photograph shows a street sweeper sending very large pengő bills into the sewer.

While many of these high denomination notes were worthless at the time they were in circulation, many have gained in value considerably since.

Collectors are keen to own notes with exceptionally high values because of the novelty of being a paper trillionaire and the absurdity of the professed values.

Ironically, trillion dollar notes which would not buy a bus ticket in Zimbabwe seven years ago are now sometimes selling for hundreds of US dollars around the world.